Tybalt is an antagonist and secondary character in Gnomeo and Juliet. He is a member of the Red Garden.

Tybalt and Gnomeo were in a lawnmower competition. After losing, Gnomeo called Tybalt a "cheater." At night, they fought and when they were overheard by the neighbors, Gnomeo escaped and Tybalt was destroyed when he crashed into a wall. However, he is intact at the end and it appears as if Gnomeo glued him back together. 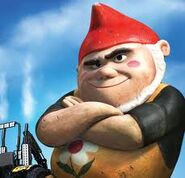 Add a photo to this gallery
Retrieved from "https://gnomeoandjuliet.fandom.com/wiki/Tybalt?oldid=6255"
Community content is available under CC-BY-SA unless otherwise noted.