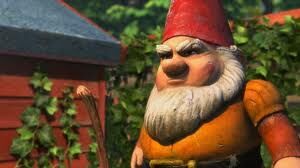 The Red Garden is the rival garden of gnomes to the Blue Garden.

The Red are more cruel and violent than their rivals, the Blue. For example, their representing lawn mower racer in the lawn mower race, Tybalt, cheated to win. They also, very cruelly, destroyed the most beloved flowers in the Blue Garden. It is unknown what mischief they were going to cause next because Tybalt was "stopped" by Benny. They eventually put aside their own mean ways and their leader, Lord Redbrick, called a truce.

Retrieved from "https://gnomeoandjuliet.fandom.com/wiki/Red?oldid=5636"
Community content is available under CC-BY-SA unless otherwise noted.